Shana De Caro, a partner in the New York personal injury law firm, De Caro & Kaplen, LLP, has been elected as chairwoman of the Brain Injury Association of America (BIAA) for 2021. 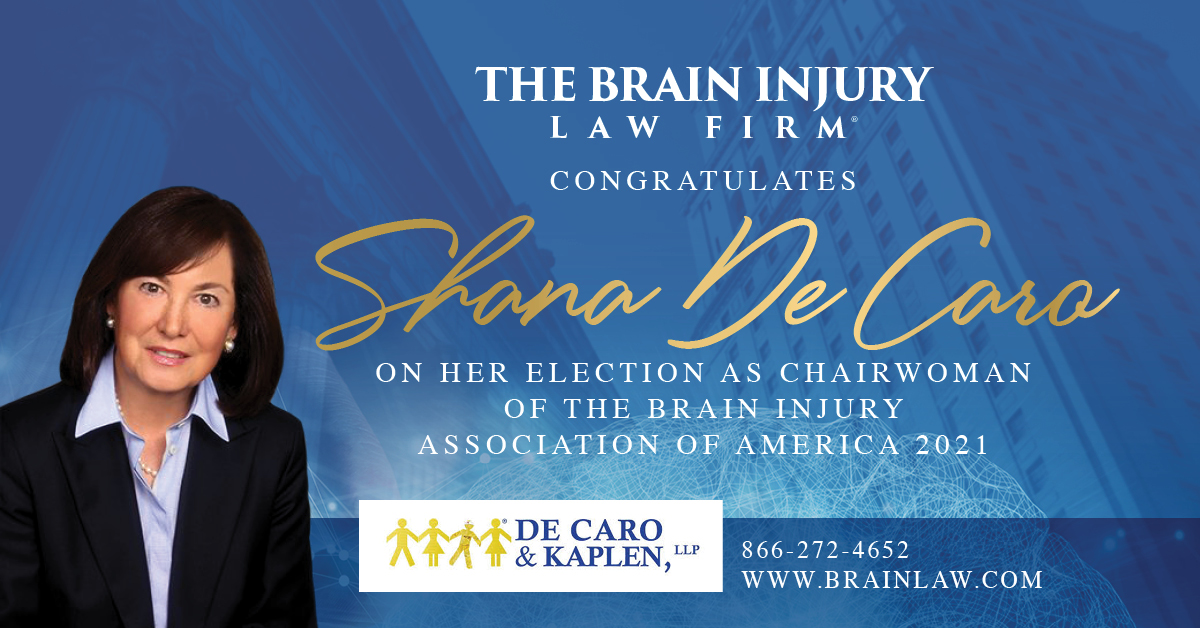 De Caro has advocated on behalf of individuals and their families following a traumatic or acquired brain injury for over 35 years, and is respected nationally for her knowledge, passion, and drive to protect the rights of those who have sustained brain damage. She has previously served as vice chair, secretary, and board of directors’ member of the Brain Injury Association of America.

In accepting her new position, De Caro said, “I am excited and humbled to accept this new role on behalf of the over 5.2 million Americans living with disability caused by brain trauma.”

Founded in 1980, the Brain Injury Association of America is the oldest, largest, and only nationwide brain injury advocacy organization in the United States. As the voice of brain injury, BIAA provides help, hope, and healing for the millions of Americans who sustain this life-altering injury.

Shana De Caro, a graduate of the Benjamin Cardozo Law School, has devoted her professional career to representing survivors of brain trauma and other personal injury caused by negligence and medical malpractice. Her professional activities include being elected as the first female chair of the Traumatic Brain Injury Litigation Group, American Association for Justice; president of the Top 25 Brain Injury Attorney Group of the National Trial Lawyer Association; member of the Board of Directors, New York State Academy of Trial Lawyers. She has lectured to brain injury advocacy groups on effectively representing survivors of brain trauma, and is a contributing author on legal aspects of brain injury to the New York Law Journal, Neuro Clinics of North America, and other medical and legal publications.

De Caro further stated, “I am honored our board of directors has elected me to this position of responsibility and trust” and expressed her desire to continue the Brain Injury Association of America’s mission to improve the lives of brain injury survivors, “I will continue to collaborate with the association’s incredible staff and board to build a better world for persons with a brain injury and their families, to further BIAA’s mission to advance awareness, research, treatment, and education, and to improve the quality of life for all people affected by brain injury.”

De Caro & Kaplen, LLP is a New York based personal injury law firm nationally recognized for its expertise in brain injury litigation. Shana De Caro is the lead author of the Amicus Curiae brief submitted to both the United States Third Circuit Court of Appeals and the United States Supreme Court on behalf of the Brain Injury Association of America, which contested the NFL concussion settlement as not being in the best interests of all players who sustained brain trauma while playing professional football.

Our attorneys have the passion and persistence to take on the toughest brain injury cases—and win. Call us today for your FREE consultation.

Our attorneys have the passion and persistence to take on the toughest brain injury cases—and win. Call us today for your FREE consultation.